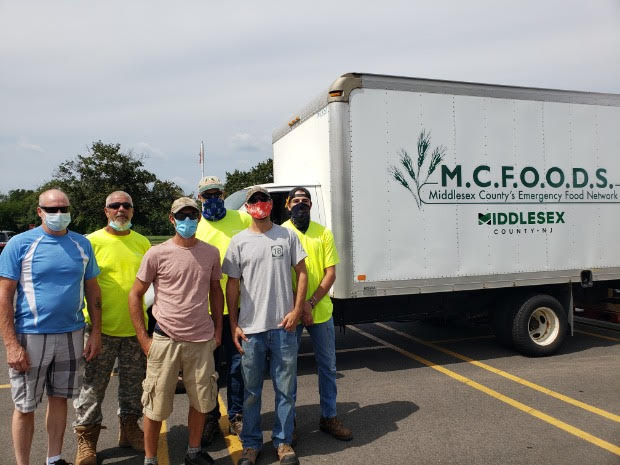 MCFOODS and FMC are so fortunate to have working relationships with many people and organizations throughout Middlesex County who value our work and our mission, and make it a priority to help out when they can. One of those organizations that has been very involved, especially since the pandemic hit, is Carpenters’ Union Local 254. On Saturday, at the Drive By Food Drive, we were able to speak with Representative Jason Friedman about Local 254 and why they choose to volunteer with MCFOODS.

Local 254 has about 5,000 members, including retirees, and there are approximately 500,000 members nationally. Jason has been involved for the last 13 years and spends his days visiting job sites, meeting with members and those involved with the projects they’re working on. Local 254 carpenters work on various jobs around New Jersey including such essential construction as highways, colleges, schools, and hospitals, among others.

We asked Jason about how he and the other members find community activities to get involved with and he said that they pick things that really interest the members. Local 254 has a volunteer organizing committee that makes a lot of those choices and the carpenters can be seen volunteering with a wide range of organizations. Jason places great importance on networking within his community and said, “hunger is something that I take an interest in locally.” ​

They say that it’s a small world here in our county, but the way Jason and Local 254 got involved with MCFOODS and FMC definitely proves that. The Union’s local office is in Edison and it neighbors the Hands of Hope Food Pantry. The carpenters are able to provide manpower and their truck to make it easier for Hands of Hope to get their groceries transported twice a year. Connections with FMC Secretary Margaret Pemberton and the East Brunswick Democrats were how Jason learned about the Drive we had at Menlo Mall, and now we have seen Local 254 members at all our events so far this summer. Jason said he has had to turn folks away who wanted to come since the interest is so significant among members. We thank Jason and Local 254 for their continuing support and we look forward to welcoming more of their members to volunteer at future events!